You are on Aboriginal Land 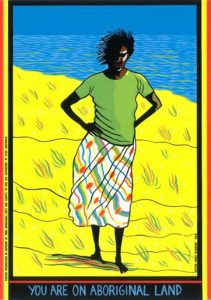 “The first version of the screen print was a limited edition of 30 copies, hand printed by the artist in 1981 at Redback Graphix, Wollongong. It carried the text ‘Pay The Rent – You Are On Aboriginal Land’, a slogan borrowed from a bumper sticker seen by the artist in North Queensland. It had diagonal black lines over yellow and red vertical stripes on either side of the pictorial image.

The second edition of ‘Pay The Rent’ was 150 copies, hand printed by the artist in 1982 at the Tin Sheds (Art Workshop, University of Sydney). The 3rd edition was a commercial run of 1,000 copies, printed in 1984 at Snap Ads, a commercial screen printing business in Sydney. The third edition carries a banner ‘You Are On Aboriginal Land’ and a line ‘Poster production in support of Mimi Aboriginal Arts and Crafts, Katherine NT’.

The words ‘Pay The Rent’ were deleted from the third edition because the slogan didn’t mean much to the people I’d had in mind when I created the work. The slogan didn’t reflect their worldview while the statement ‘You Are On Aboriginal Land’ was a matter of fact. The people I’d had in mind spoke their own languages. Some spoke English or ‘creole’ but there were still many among them who only spoke their tribal languages.

The first two editions could be best described as an artist’s prints with words, whereas the third edition had been shaped into the more conventional form of a political poster.

The figure of a woman was taken from a black and white photograph of a group of Tiwi on a beach at Cape Fourcroy, on the south west coast of Bathurst Island (one of the Tiwi Islands, north of Darwin in the Northern Territory). The photograph, by the artist, was taken on a camping trip in 1980. The woman standing with hand on hip was Phillipa Pupangamirri, the mother of Gordon Pupangamirri, who worked at Tiwi Pima Art at Nguiu. The hunting party included, among others, Piparo (Winnie Munkara), Geraldine Tungatalum, Inez Kerinaiua, John Baptist Pupangamirri, his wife Phillipa (figured in the poster) and their daughter Annunciata.

Tikilaru is the name of the country where the photograph was taken and where the concept for the poster was generated. Piparo (Winnie) was a custodian of Tikilaru and lived with a group of men and women in a bush camp at Cape Fourcroy. The group lived a relatively traditional life, notwithstanding hunting rifles, tea, sugar, flour and vehicles – they hunted for bush tucker and conducted and performed ceremonies.

During a bush trip in 1980 through Tikilaru, our party encountered a Toyota 4WD on a narrow bush track. In the 4WD were two businessmen from Darwin who had been exploring Tikilaru with a view to developing a tourist resort near a beach. Our vehicles came head to head on the narrow bush track and Winnie confronted the Darwin businessmen in Tiwi style, theatrical, with dramatic stick waving and cracking on the ground and calling to them in Tiwi that “Tikilaru is not your country”.

That event remained in my mind as a demonstration of land ownership from an Aboriginal perspective. The experience of being on Aboriginal land in the Northern Territory, and in the country of the Tikilawula (the people of Tikilaru) gave me a greater understanding of the significance of landscape, and of Australian landscape. There is a large lake at Mungutuwu at Cape Fourcroy that in 1980 was still avoided because it was a sacred site. Lake Mungutuwu is a resting place for Ampiji, the Rainbow Serpent.

In a quintessentially Australian scene, the woman in the poster, based on the image of Phillipa and the memory of Piparo, stands on a beach, on an island, where land, sea and sky intersect. As another Tiwi, Valerian Munkara remarked, the poster “gives me memories, it reminds us of our mothers”.