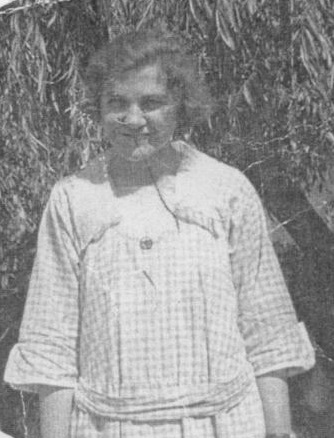 My mother, Hilda Finnerty, the fifth child of John and Ida Doosey, was born in the Gresford district on 17th November 1901. The family lived on a dairy farm at Trevallyn and the children walked some distance to a small school called Campsie.

On winning a State Bursary Mum attended Maitland Girls High, where she gained her Leaving Certificate and a Teaching Scholarship to train in Sydney. She had not previously been to Sydney, nor had she met the relatives with whom it was arranged she would stay.

After completing her training she was appointed to Nutshell, a one-teacher school sixteen kilometres east of Tenterfield. Board was with the Pitkins, who had a large family and lived, presumably, not too far from the school.

Some years ago I remember hearing on ABC radio a teacher being interviewed about her early experiences. She was living with a country family in time of drought and the tanks were low. This necessitated all using the same bathwater, beginning with the youngest child. Her turn came after the children but before the parents. If Mum had similar experiences she didn’t speak of them.

Weeknights were spent preparing lessons and correcting her pupils’ work, but after school on Friday she rode on horseback into Tenterfield for the weekend, on the way meeting another teacher, Mary Carry (nee Hagan) who taught at Black Swamp. They stayed at the Royal Hotel, where there was a stable and yard for the horses. During the summer months tennis was played on Saturday afternoon, there would mostly be a dance on Saturday night and more tennis on Sunday. In winter hockey was their sport. On one occasion, when there was a ball on the Friday night, as well as the usual activities, Mum was amused to hear a lady remark to her husband, ‘Those young teachers are everywhere!’ Mum and Mary later married first cousins. During this time Mum met my father, Vincent Finnerty, the sixth child of Patrick and Kate Finnerty. They too were dairy farmers and lived at ‘Hillcrest’, five kilometres from town.

By the time Mum was transferred to Guyra she and Dad had an ‘understanding’ and the next few years were spent planning and saving. There was more tennis and hockey. Here she lived with the Mulligan family and my sister Moya was named after their youngest child.

Mum and Dad were married at St John’s Catholic Church in Maitland on 2nd October, 1929. Our home, ‘Willow View’, had already been bought. They honeymooned in the Blue Mountains staying at Jenolan Caves House and also spent a few days in Sydney buying furniture. This would have gone by rail to Tenterfield, and is still being used by family members.

I am the third of six children, four girls and two boys. While we were healthy and rarely missed a day’s school, there were anxious times.

Moya fell in the playground and ruptured her spleen when she was ten. After surgery and a long stay in hospital she made a full recovery.

In January 1946 Colleen contracted infantile paralysis (later called polio), losing the use of her left arm. She was in total isolation in Tenterfield Hospital for three weeks, before being transferred to the orthopedic block at Waratah, where she was a patient for twelve months, undergoing treatment and therapy. She regained partial use of her left arm. Similar treatment was available in Brisbane, which was closer to home, but Newcastle was chosen because Mum had family nearby who could visit Col.

In April of that year, Kevin, our baby boy was born. As a young man, my brother John was mustering cattle on a large station in Queensland, when his horse fell and he was thrown. His spleen was ruptured and he was taken by the Flying Doctors to Julia Creek Hospital. Later there were complications, resulting in further surgery in Brisbane.

As small children, along with teaching table manners, Mum was particular about our speech and we were corrected as necessary. By the time that we were at school we were given a grammatical explanation when corrected. We became familiar with many stories and poems, told rather than read in our early days, as some work could be going ahead during the telling. I asked for ‘Babes in the Wood’ regularly. It concluded with a song and the last lines were.

And when they were dead,
The Robins so red,
Brought strawberry leaves and over them spread.

By this time I would have difficulty keeping back the tears.

Gradually we were introduced to books, more poetry, plenty of proverbs and quotations:

Mum was a great help with homework, although sometimes it developed into a much longer session than the child being helped intended.

I am left-handed and at school at the time it was usual for children for children to be forced to use their right hand. Mum felt this was wrong and spoke to the sisters accordingly. I remained left handed.

Mum considered ‘got’ an ugly world and it was studiously avoided. Over the years if we used the word when writing home, we would underline it to indicate that we knew it was not desirable. Ending a sentence with a preposition was also a no-no.

There were many concerts during our school years and the appropriate costumes had to be made. On one occasion, Pat, my younger sister, was in a production of ‘The Desert Song’ and the preparation went on for months. A long frock was required and Mum was pleased that she would be able to wear a white one, made by Colleen for her to wear as an attendant at The Catholic Ball. Pat didn’t tell any of us she was a female lead, singing solos, as well as duets with the male lead. For the performance the second night, several frills were added to the skirt of her dress.

During the Second World War, when many male teachers were in the armed forces, Mum received a request from the Education Department to consider returning to teaching for the duration of the War. However, having children under school age, this was not possible.

Dad loved his horses and rode to ‘Hillcrest’ at weekends to check the cattle. For many years he competed in the ring events at Sports Day and the Annual Show. I remember Mum saying, with feeling that in another life she would choose to be a horse.

Mum rose early and retired late. She thought she was fortunate in not needing a lot of sleep. Perhaps it was a case of her system having adjusted to what was necessary. It was in the evenings that letters were written, garments knitted, clothes mended, socks darned and finally, a look at ‘The Northern Daily Leader’.

Both Mum and Dad were involved with functions and fund raising for Church, school and various organizations in the town. After one apparently lively meeting a cousin said to me ‘Your mother can think on her feet!’ At the time I wasn’t sure what he meant.

Dad died in 1964 having seen only three of his seventeen grandchildren. In the same year Kevin commenced his teacher training in Armidale.

In her senior years Mum was asked to speak to the Rotary Club about her early years in Tenterfield. Afterwards one of the Rotarians, George Manser, a former pupil, pointed out that he had not started school until he was seven and for formal lessons Mum had been his only teacher.

The Laing family was close friends and on most days one of them would call on their way home. At the end of 1996 I attended a combined celebration for the Golden Wedding of Marjorie (nee Laing) and Bill Humphrey and the Ruby Wedding of Nanette (nee Laing) and Brian D’arcy. It was a day of remembering and both Marjorie and Nanette made reference to Mum’s housekeeping. Marjorie said that over the years she had often quoted Mum as saying that visitors gained their first impression at your front door, so it was important to keep the area cobweb free, the steps swept and under the door mat shaken. Marjorie occasionally spent a night at our place and she also remembered that before retiring, Mum did some general tidying – so that she could face it all again the next morning.

Mum died in 1988 after a long and full life, lived with integrity.